Who is Quique Setien? The Cruyff-loving alternative option to Xavi 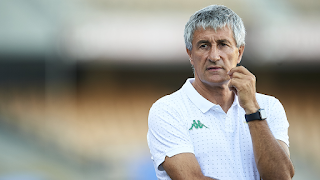 With both Xavi and Ronald Koeman turning down the opportunity of their former club, the Barcelona board have chosen the Spaniard as head coach on a deal that runs until 2022 following a challenging period for the club under Valverde.

Valverde’s position at Camp Nou had long been under scrutiny, but the pressure intensified following Barcelona’s elimination in the Supercopa to Atletico Madrid.

It is understood that Barcelona were initially eager to appoint Xavi as permanent coach to replace Valverde, but the current Al-Sadd manager stated that any return to his former club will only happen in the summer.

However, Setien has been given a contract until the end of the 2022 season - effectively making Xavi's return to the Camp Nou unlikely in the short term.

The ex-Betis coach was chosen ahead of Barcelona B coach and former player Francisco Garcia Pimienta.

Who is Quique Setien?

Setien was a talented midfielder for Racing Santander, his hometown club, where he spent eight years – amassing 205 appearances and scoring 43 goals.

He went on to have fruitful spells at the likes of Atletico Madrid and Logrones, retiring at Levante.

The 61-year-old got his coaching career to a start at Racing as well in 2000, along with managerial roles at Poli Ejido and Logrones before making the jump to coach the Equatorial Guinea national side. He also trained Lugo for five years, where he led the side to promotion to Segunda Division B.

The Spaniard then took on the reins of Las Palmas, whom he rescued from relegation in his first season and led to an 11th-placed finish.

A second season at Las Palmas saw a push to secure European qualification, but the team deflated in the final hurdle of La Liga – though not without Setien having instilled a fresh style that involved touch and possession.

His impressive tenure at the Canary Islands side caught the attention of Real Betis, who appointed him as permanent manager in 2017. In his first season at the club, he returned Betis to Europe, ran out 5-3 victors in the derby against Sevilla, led the team to sixth place and secured qualification to the Europa League. He also oversaw the rise of players such as Fabian Ruiz and Junior Firpo in Seville, who left on lucrative transfers to Napoli and Barcelona respectively.

Setien’s second season at Real Betis started promisingly enough, progressing to the semi-finals of the Copa del Rey but falling to defeat against Valencia. He then suffered Europa League elimination at the hands of Rennes and lost momentum in La Liga, going from fighting for a Champions League spot to languishing in mid-table.

The steady decline in results led him to leave the club despite having a year left on his contract.

The colourful, attacking football so synonymous with Setien first sprang up in his playing days, staying with him well into his coaching career. The possession-based football is one of the hallmarks of his teams, often favouring a 4-2-3-1 formation and putting emphasis on attacking. It’s no coincidence that his favoured style has drawn comparisons to Barcelona legend Johan Cruyff – someone he has long admired.

"I remember when Johan Cruyff’s Barcelona came along,” Setien told The Coaches Voice in 2019.

"You played against them, and you spent the whole match running after the ball. I said to myself: ‘This is what I like. I would like to be in this team, and know why this is happening.’

"How can you get a team to have the ball permanently, so that the opponent is running after it for the whole match?


"From then on, I started to make sense of what I had felt throughout life, through my career.

"I started to really watch football. To analyse it. To understand what I felt, and what I wanted to put into practice when I became a coach."

And now, in a twist of fate, he has been given the challenge of being appointed manager of the club where his style of play was born.
Atletico Madrid Barcelona manager Camp Nou Ernesto Valverde Ex-Real Betis coach Quique Setien Ronald Koeman xavi