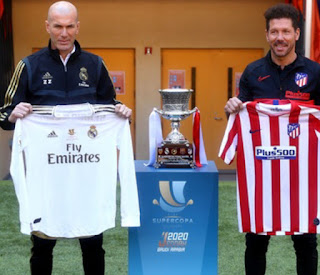 Zidane’s team knocked out Valencia 3-1 in the semi-final, while Simeone’s Atletico beat Barcelona 3-2.

The Atletico boss won’t cowed by the seeming depleted squad of
Zidane with some players set to miss the Supercopa.

“Madrid are a team we know very well, they have a coach who is an absolute winner” Simeone told journalists during a press conference on Saturday.

“Every time they play, they transmit that they have to win and they do win. They are without [Karim] Benzema, [Gareth] Bale and [Eden] Hazard, but that doesn’t change
a thing, they’ll be looking to field their strongest side.

“Their distribution is excellent and they’ll have players arriving to join the attack from midfield.

“They’ve got Vinicius Junior and Rodrygo [Goes], and if they play the team will have more velocity and more possession, so we will have to think about how we can attack

those positions and punish them in the way we want.”

Simeone would also reveal that he has improved on the job with age and believes he will get better every other year.

“It’s like life itself, we improve with age. All of the experience you build up with time helps you to develop,” Simeone added.