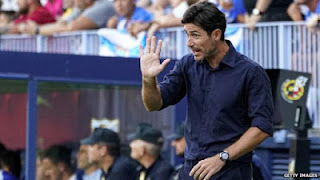 Spanish side Malaga have suspended head coach Victor Sanchez after an explicit video of the 43-year-old was posted on social media.

The second-tier side said an investigation had been launched.

Writing on Twitter, Sanchez said he had been blackmailed over the video prior to it being published.

"I am being subjected to a crime against my privacy with harassment and extortion," he said.

"The matter is in the hands of the police and I entrust myself to follow their instructions.

"Sharing or disseminating an intimate content of any person without consent is also a crime either through social networks or messages or in any other way. Thank you for your understanding and support."