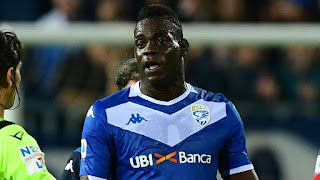 The weekend's fixture between the clubs was stopped after monkey chants were aimed at the forward. Lazio have been fined €20,000 following incidents during last weekend’s Serie A clash in Brescia that saw home striker Mario Balotelli once again become the subject of racial abuse.

The forward had opened the scoring after 18 minutes of the match, which was subsequently suspended around the 30-minute mark as monkey chants were audible among the 1,500 travelling fans.

After warnings that the match would be abandoned if the abuse continued, Lazio went on to win the game 2-1.

"Is a loss that hurt but we will come back stronger and we are on the right way!” Balotelli posted alongside a video of his goal.

"Lazio fans that were today at the stadium SHAME ON YOU! #saynotoracism."

The Rome side have now learned their punishment for the incident: a fine of €20,000.

Serie A has been dogged with numerous incidents of racial abuse and faux pas so far this season.

Balotelli had previously threatened to walk off the park after being subjected to racial abuse in Verona, while Inter forward Romelu Lukaku was left frustrated after Cagliari fans were cleared of directing monkey chants towards him as he lined up a penalty in a 2-1 victory on Sardinia as they were not sufficient enough in “size and perception”.

Czech side Slavia Prague were later fined by Uefa after their fans had been caught making similar noises towards the forward during a Champions League encounter.

“Uefa now has to do something about it, because things like this in stadiums is not right,” Lukaku told Esporte Interativo.

“Today it happened twice with me and that is not right with people. We are in 2019, there are many players with many different nationalities in their teams.

“When there are people that for me are bad, at the stadium, that’s not a good example for the kids. I hope that Uefa now do something about it, because the whole stadium did it when Lautaro [Martinez] scored the first goal, and that’s not good for the people watching this game.”

It has not only been fans that have come under fire, though - the Italian press was roundly criticised after it billed Inter’s meeting with Roma ‘Black Friday’, led by pictures of Lukaku and Chris Smalling.