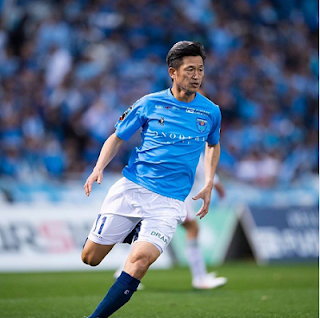 Kazuyoshi Miura, the world's oldest professional footballer, has signed a new contract that will seem him continue playing until the age of at least 53.

The former Japan international, whose career has so far spanned an incredible 34 years, has put pen to paper on a new 12-month deal with the J1 League side, who won promotion to the top flight last year.

Nicknamed 'King Kazu', Miura made just three appearances in the league last season, including a three-minute cameo during the final game of the season at home to Ehime FC.

In a statement on the club's website, Miura said: 'In the 2020 season, I was able to renew the contract with Yokohama FC.

With the team in J1, I will make every effort to help the club stay in the division.