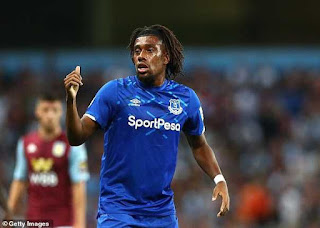 Everton summer signing Alex Iwobi has provided an updat on his injury which has kept him sidelined for weeks now.


The Nigeria international was substituted in the 11th minute against former side Arsenal in December with a hamstring injury, and he has not played ever since.


However, the 23-year-old’s latest update suggests he could be back sooner than expected and it would be a huge boost for Coach Carlo Ancelotti who has barely seen the £34m addition in action.


Iwobi has not impressed since his transfer to Goodison Park either, scoring just two goals and providing one assist in 20 appearances across all competitions for the Merseyside outfit.


Now, It will also be interesting to see if there's a place for iwobi in Ancelotti’s starting XI, with Duncan Ferguson, Calvert-Lewin and other attacking players impressing.
ALex Iwobi Arsenal everton Goodison Park Instagram Nigeria International