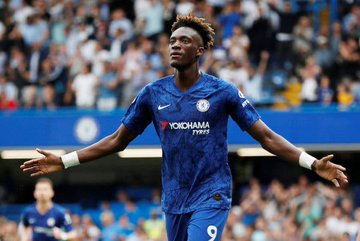 Chelsea Coach Frank Lampard believes that Tammy Abraham has what it takes to raise place Harry Kane in the England national team.

Lampard added that he was always confident that Abraham has the confidence to fill the Chelsea no.9 shirt that has become a burden for many.


Tottenham Striker Kane is ruled out for three months with a hamstring injury that requires surgery, which has led to talks on his chances of being fit enough to play for England at the Euro 2020 finals.


Abraham only recently joined up with England coach Gareth Southgate’s side this season but has scored his first goal for the senior team which was against Montenegro.


“It is bad for Harry, it is sad to see him injured because he is a top professional," Lampard said.


“But Tammy can become a regular in the squad. He has given himself a chance.


“There are various competitors for that place. It just depends on what Tammy can offer and what the squad is.


“I am delighted for Tammy's achievements so far this season. I never plan to disturb Gareth Southgate, he has his squad to pick.


“But Tammy is a perfect player who can play at the very top level.


”Tammy would surely know that this is a chance for him. He’s not silly.”


Lampard also revealed that at the start of the season he gave personally Abraham the Chelsea number 9 shirt, which has proved to hold curse players like Fernando Torres, Gonzalo Higuain and Radamel Falcao could not survive.

He said: “People told me ‘be careful, that shirt has not produced the best feeling for players here.’


“But it was my own decision to give it to him based on his personality. His determination was saying ‘I want to be Chelsea’s number nine.’ That has always been his aim.


“Many top players wearing the no 9 shirt failed score enough. So it becomes negative.


“If you signed a 25 year old it can be a easy decision, but a young boy - does he want the pressure? My opinion was yes.”
Chelsea coach curse players England national team Frank Lampard Harry Kane Tammy Abraham Tottenham