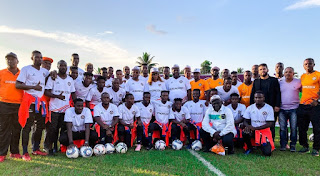 According to the club’s media director, George Essien, the shirts can be collected from Vandrezzer FC staff at the stadium’s entry point from 1pm on matchday.

Coming off the back of a narrow loss at J. Atete FC, Rafael Everton and his side will be looking to claim all three points against the Yenegoa side.

The game, which is scheduled to kick off at 4pm, will mark their first-ever home game in league football.

The Lions of Naija were originally due to play their first home game of the season on NNL opening matchday, against Jossy United, but the fixture had to be postponed indefinitely following the Owerri club’s failure to complete their registration with the league body.

Following the postponement, Vandrezzer FC were not in action on opening day, but Bayelsa United travelled to Ogbomoso, where they were beaten 3-1 by Crown FC.