The draw for the last-32 of the Europa League 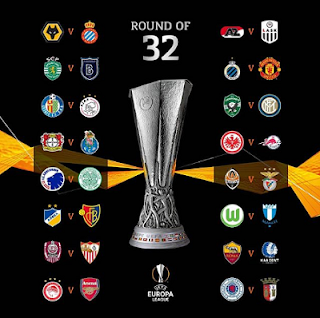 The draw for the round of 32 in the Europa League took place on Monday afternoon in Nyon, Switzerland, and featured all three English sides after they qualified for the knockout rounds.

Wolves were the first team out of the pot and take on Barcelona-based Espanyol.  Celtic meet Copenhagen while Rangers are up against Portuguese side Braga.

Sporting Lisbon will take on Istanbul Basaksehir while Getafe were selected to go up against Ajax.

Bayer Leverkusen and Porto were drawn against each other. Cypriot team APOEL will have to get past Basel. Cluj face Sevilla as Alkmaar take on LASK from Austria.

Shakhtar Donetsk have been matched up with Benfica with Wolfsburg to face Malmo and Roma to take on Gent.