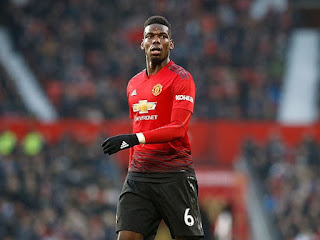 Former Manchester United right-back Antonio Valencia has called on the Red Devils’ faithful to show Paul Pogba a lot of love in order to inspire the France international to rediscover his fine form.

Pogba has missed 14 matches in all competitions through an akle injury, but is expected to return to action soon after making recovering from the setback, but his former teammate Valencia believes he needs the love of the fans and every at the Old Trafford to hit his real element on the field of play.

Transfer rumours and a dip in form before the injury spell have conspired to put Pogba down in the reckoning of Old Trafford faithful.

“Pogba is a star. Do you know what he needs? Love,’ Valencia, now 34, who who joined Liga de Quito, LDU in his country Ecuador this season, told Mundo Deportivo.

“I have heard many rumours about [Zinedine] Zidane and Real Madrid, but he [Pogba] never said anything. “He is a clever person. If at United we give this affection, Pogba will shine.”

Valencia also spares some thoughts for his former club Manchester United as Ole Gunnar Solskjaer works harder to turn their season around for the better.

United made a bold statement of a remarkable improvement with a 2-1 away win over Manchester City in their Saturday’s derby.

Valencia believes Marcus Rashford who scored from the spot in the win and goalkeeper David de Gea will continue to play great roles in steadying the side’s resurgent form.

He added: “It’s difficult to manage such a unique case. I see United getting better and better, Rashford is going through a great time.