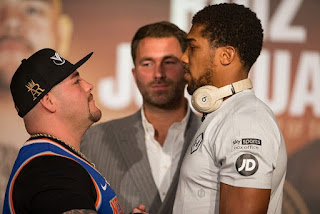 Andy Ruiz Jr hopes Anthony Joshua comes into the ring riled up and swinging for the fences in their heavyweight rematch on Saturday night in Diriyah, Saudi Arabia.

The heavyweights clash for a second time in Saudi Arabia on Saturday night, six months after Ruiz produced one of the biggest upsets in the sport’s history.

Joshua looked out of sorts in New York this past summer and is expected to adopt a different, more cautious approach second time round.

But Ruiz is banking on his rival losing his cool.

“I want him to be mad and swinging in the ring, I want him to have that attitude because I will be calm and know exactly what we need to do,” he said.

“I don’t know if I am his bogeyman, I think his style was just perfect for me and I think it will be the same.

“I think he will box around nicely for four or five rounds until I take the pressure to him, start qhitting his body and mixing it up.

“I did say he was not good enough to avoid me for the full 12 rounds, on the backfoot, we have been working on this for a round three months now and I know, whatever he brings, we will be ready for it.

“The doubters were just wondering, ‘What happened to Anthony Joshua? There’s something wrong with him.’

“Truly I think it was my style. It was the way that I handled him and that I took his punches.

“He gave me the hardest punches that he has so I ate them and that is what we are going to be doing again.”

Ruiz accepted the first fight at six weeks’ notice after Jarrell Milller was forced out for failing a drugs test.

But the Mexican-American insists his success – and his £5million pay day – has not gone to his head.

“My spending has not taken away my competitive edge,” he said. “June was just my first big fight; there is so much I have to accomplish and prove, this is just the beginning.”
Andy Ruiz Jr Anthony Joshua Diriyah Heavyweight Boxer Mexican-American boxer Saudi Arabia