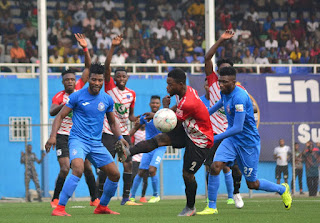 Plateau United maintained top spot in the table following a 0-0 away draw against their hosts Rangers at the Nnamdi Azikwe Stadium, Enugu.

Heartland and Kano Pillars also battled to a draw at the Okigwe Township Stadium.

The home team took the lead three minutes after the break through Ugochukwu Leonard, while Nyima Nwagua got the equalising goal for Kano Pillars five minutes from time.

At the Muhammadu Dikko Stadium, Dakkada FC continued their impressive start to the season, after 0-0 draw against Katsina United.

The Uyo club stayed in second position in the table with 16 points from nine matches.

In Uyo, Akwa United recorded their second win of the season following a hard fought 2-1 home win against Rivers United.

Akarandut Orok gave Akwa United the lead on 10 minutes, while Ngouan Konan equalised for the visitors in the 34th minute.


Victory Omodiagbe scored the only goal in the sixth minute as Warri Wolves edged out Wikki Tourists at the Warri City Stadium.

The home team scored twice in the first half through Emmanuel Ugwuka and Jimoh Oni, while Abdullahi Lala got the visitors only goal of the game four minutes after the break.