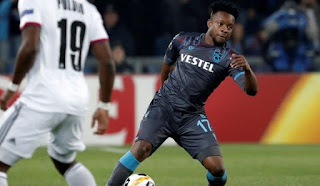 Super Eagles midfielder Ogenyi Onazi is thrilled to be back on the pitch again after spending almost a year on the sidelines due to Achilles tendon injury.

He made his first appearance of the season for Trabzonspor in last Thursday’s Europa League 2-0 defeat to Swiss club, Basel.

Onazi played for 14 minutes in the Trabzonspor’s Turkish Cup 4-1 home win against Altay on Thursday replacing English man Daniel Sturridge who scored a brace in the game.

“I thank God for being be able to go back to football and play again. It is impossible to reach top form immediately. It is not an easy process,”Onazi told reporters after the game.

The formed Lazio midfielder also reflected on the win against Altay.

“The first half was not easy for us, then fought hard to win the game after encouraged us during the break. Everyone performed well in the game,” Onazi added.