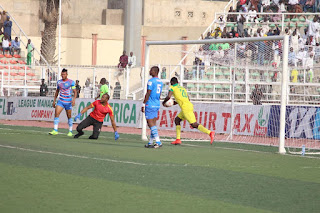 League leaders Plateau United suffered their first defeat in the Nigeria Professional Football League this season after going down to a 1-0 defeat against Heartland at the Okigwe Stadium on Sunday.

The defeat was the Jos outfit first in seven NPFL gamesHthis season and Heartland’s second of the campaign.

Plateau United maintained top spot in the table with 14 points from seven games despite the loss.

Tochukwu Anueyiagu and Ikenna Cooper were both on target for the home team in the game.

Chijoke Alakwe (brace) , David Ebuka, Abdullahi Musa, Auwalu Ali and Rabiu Ali were all on target for Pillars in the game, while Bala Yazuza scored Delta Force’s only goal.

At the Akwa Ibom International Stadium, Uyo, Ndifreke Effiong netted a hat-trick as Akwa United registered their first win of the season courtesy of a 4-0 thrashing of Adamawa United.

Effiong scored in the 6th, 14th and 69th minutes, while Paul Obata got the third five minutes before the half hour mark.

Sunshine Stars and basement side, Nasarawa United served a thrilling contest in Akure with the hosts coming out with a 4-2 win.

Isreal Abia scored all four goals for Sunshine Stars, while Chidi Solomon and Mohammed Manga (own goal) were on target for Nasarawa United.

Tasiu Lawal netted the winning goal from the spot as Katsina United edged out MFM 1-0 at home, while Warri Wolves and Lobi Stars battled to a 0-0 draw in another fixture.