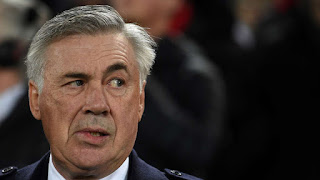 The 60-year-old has been mentioned as a candidate for vacancies at Arsenal and Everton. Napoli have sacked manager Carlo Ancelotti just hours after he helped the Serie A side seal qualification for the Champions League knockout phase.

"The friendship and mutual respect between the club, president Aurelio De Laurentiis and Carlo Ancelotti remains intact."Ancelotti was in charge on Tuesday as his side defeated Genk 4-0, sealing a second-place spot in Group E behind Liverpool.

It was the first time that the Partenopei have reached the last 16 of the Champions League since 2016-17, but it was not enough to save Ancelotti's job with his side slumping in recent weeks.

Prior to Tuesday's game Napoli had gone nine games without a win in all competitions, a run that had seen them drop down to seventh in the Serie A table, 17 points behind table-topping Inter.

It is a far cry from the club's domestic performances over the past two seasons, with Napoli having finished runners-up to Juventus in 2017-18 and 2018-19.

Ancelotti was also reported to have fallen out with the club's board and De Laurentiis after just a season and a half in charge.

The 60-year-old acknowledged that the victory over Genk may not have been enough to save his job after the game, saying that he was due to meet with De Laurentiis to discuss his future.

Former AC Milan manager Gennaro Gattuso is reportedly the leading candidate to replace Ancelotti, with the 41-year-old having left his role at San Siro at the end of last season.

But Ancelotti may not be out of a job for long, as the former Real Madrid, PSG, Juventus, Bayern Munich and Chelsea boss has been mentioned as a candidate for vacancies at Arsenal and Everton.

The Gunners are looking for a full-time boss after sacking Unai Emery last month, with Freddie Ljungberg serving as interim since the Spaniard departed north London.

Everton are also in the market for a manager after dismissing Marco Silva last week, though interim boss Duncan Ferguson did lead the Toffees to a win over Chelsea in his debut at the weekend.
Arsenal Bayern Munich carlo Ancelotti Champions League Chelsea everton juventus Napoli PSG Real Madrid Serie A