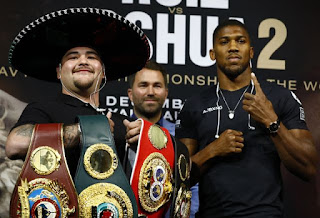 Speaking about the fight in his pre-match press conference on Friday, Mourinho said he turned the invitation down due to Spurs’ home game against Burnley in the Premier League on Saturday.

“The only bad thing of me getting the job at Tottenham is that I’m not going to be there (Saudi Arabia) because I was invited by the prince ( ) to be there. But I prefer to be in the match against Burnley.”

Mourinho, however, said he hopes Joshua wins but that anything is possible.

He said: “I just love the sport and I like Anthony very much because he is a great kid. I hope he wins but in sport you can lose, so let’s see.”

Joshua will hope to reclaim his WBA (Super), IBF, WBO and IBO heavyweight titles when he faces Ruiz again.

After coming in as an 11–1 underdog in their first meeting in June this year, Ruiz won via technical knockout in the seventh round, ending Joshua’s undefeated record and becoming the new unified heavyweight champion.

The fight is considered one of the biggest upsets in boxing history, drawing comparisons to Mike Tyson vs. Buster Douglas in 1990 and Lennox Lewis vs. Hasim Rahman in 2001.

Meanwhile, Mourinho will hope to return Spurs back to winning ways after they lost 2-1 to Manchester United at Old Trafford on Wednesday.

Prior to the defeat against United, Spurs had won three straight games after Mourinho took over from Maurizio Pochettino.