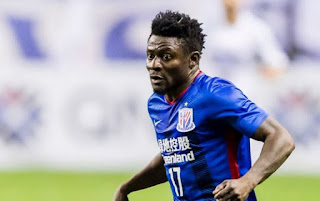 Nigeria forward Obafemi Martins has denied a report linking him up with a Saudi Arabia football club on a deal worth $1.5 million

An online media platform had reported last month that Martins, former player of Chinese​ Super League​ side Shanghai Shenhua, rejected the offer in Saudi Arabia on the ground that the oil-rich country does not have top night club.

“How on earth will I even reject an offer because of absence of night clubs in a place? Fortunately, there is no even a deal for me in Saudi Arabia that I will reject,” Martins explained .

“it is rather so unfortunate, the people behind this report supposed to get their findings right.”

The injury sidelined him for a lengthy period and he was certified fit in May this year.

“I am an open person and friendly to any journalist who wants to know anything about me. I think putting facts right and balancing stories are some of the hallmarks of a good journalists,” Martins said.
hinese​ Super League​ Nigeria forward obafemi martins Obagoal Saudi Arabia football club Shanghai Shenhua