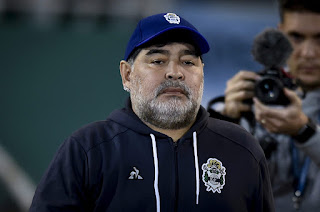 Argentina legend Diego Maradona has named late Real Madrid legend Alfredo Di Stefano as the greatest footballer ever ahead of the likes of Pele, compatriot Lionel Messi and Cristiano Ronaldo.

Maradona made the claim while speaking in an interview with AS Argentina.

And speaking on Di Stefano as the greatest player ever, Maradona said: “I think the best was Di Stefano.

“He was superior to everyone, including me. Pele did not want to recognize Di Stefano. Pele’s friends invented a trophy for him as the living legend of football. But even I have beaten him to become one of the best players in history.”

When asked how many Ballon d’Or awards he thinks he would have won had he still been playing, Maradona replied: “I think I would have had many. But Messi’s record would still remain superior to mine.”
Alfredo Di Stefano Argentina legend Ballon d’Or winner Cristiano Ronaldo Diego Maradona Lionel Messi Pele Real Madrid legend