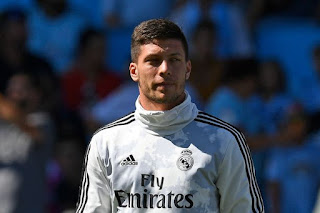 Real Madrid are ready to try and tempt Arsenal into selling Pierre-Emerick Aubameyang in the January transfer window by offering Luka Jovic as part of the deal.

Aubameyang is Arsenal’s top scorer this season with 12 goals in all competitions.

However, Aubameyang will be out of contract in the summer of 2020, when he will be free to leave the club for nothing.

According to Duncan Castles on the Transfer Window Podcast, Aubameyang has been stalling on signing a new deal and that has prompted interest from Real Madrid.

The Spanish giants believe he may be available – either now or in the summer – with Arsenal having previously stressed that they would not allow players to run down their contracts, as happened with Aaron Ramsey.

Real bosses have spoken to Aubameyang’s representatives to see if he would be interested in moving to the Bernabeu and have floated the idea of using Jovic as bait to land the striker.

Former Frankfurt frontman Jovic only arrived at Real in the summer, costing £58million, but has struggled to settle in the Spanish capital, scoring just once.

Jovic joined the club with a reputation as one of Europe’s hottest young talents, though, having scored 27 times last season and capturing attention with his performances in the Europa League – with Arsenal credited with interest at the time.

Any deal is dependant on Aubameyang and whether he definitely will not extend his Arsenal contract, but he is believed to be waiting to see who will be appointed as the club’s new manager before making a final decision.
Europa League frankfurt January transfer window Luka Jovic Pierre Emerick Aubameyang Real Madrid