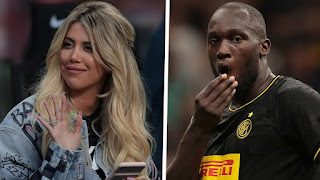 The former Manchester United star has been in fine form since moving to San Siro, but he failed to shine during his side's European campaign. Wanda Nara is not impressed with Romelu Lukaku's impact at Inter, pointing out that, unlike her husband, the Belgium striker will not be involved in the latter stages of the Champions League.


The arrival of Lukaku from Manchester United last summer effectively spelled the end for Mauro Icardi at San Siro.

Icardi had worn the captain's armband for the Nerazzurri and for years propped up a troubled side, but heated disputes between player and club in 2019 saw him lose the captaincy and even his place in the team.

Conte's arrival did nothing to solve that impasse, as the ex-Chelsea man put his faith in Lukaku and Lautaro Martinez up front while Icardi was loaned out to Paris Saint-Germain.

But while the new attacking pair have been lethal in Serie A, scoring a combined 20 goals, in Europe it has been a different story.

Lukaku managed just two strikes in the Champions League as Inter crashed out in the group stage, and they will now dispute the Europa League title in 2020.

PSG, meanwhile, sailed through Group A with Icardi hitting five - and that fact was not lost on his wife and agent.

"It would be good to see [Lukaku] in big games too. He hasn't scored in the Champions League, he'll watch the knockout rounds on TV," Wanda fired to Tiki Taka when it was suggested that the former United man was more of a team player than Icardi.

"I think Conte is Inter's real asset. He makes the difference, he has only played three times with the first-choice midfield he put together at the start.

"So Conte makes the difference. Then we'll change our minds week by week. Lukaku had been criticised after the Champions League, now he is praised like a phenomenon.


"I am an Inter fan, but I cannot stand the disrespect because we are talking about the former No. 9 and I am right here. I saw a No. 9 that scored 150 goals."

Both Inter and PSG lead their respective leagues going into the winter break in Italy and France.

Conte's men sit level on points with Juventus at the Serie A summit, nudging ahead on goal difference, while the Parisians enjoy a seven-point advantage over Marseille in Ligue 1, with Icardi having pitched in with nine goals so far.
Antonio Conte Champions League Former Manchester United striker Mauro Icardi Romelu Lukaku San SIro Wanda Nara