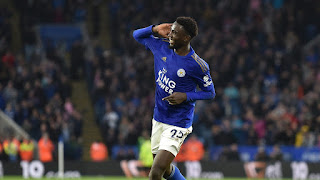 Leicester wrote on their verified Twitter handle:”23 today! Have a good one, Ndidi.”

Ndidi has been one of the standout performers for Leicester who are currently second in the league table.

So far this current campaign, Ndidi has made 18 appearances and scored two goals in all competitions.

In 2015, he joined Genk from Nigerian football academy Nath Boys, and made his debut for the Belgian side with on 31 January 2015 against Charleroi in a 1–0 away defeat.

During the Belgian League play-off game against Club Brugge, Ndidi scored a long-range goal, which was named the goal of the season in the Belgian league.

On 3 December 2016, Genk agreed a £17 million transfer deal with English champions
Leicester City for Ndidi with the deal being confirmed on 5 January 2017.

Ndidi made his debut for the club on 7 January 2017, in a 2–1 win against Everton in the third round of the FA Cup.

He made his first Premier League start on 14 January 2017 against Chelsea at home in a 3–0 defeat.

He was called up to the Super Eagles on 8 October 2015, making his debut in the friendly game against DR Congo, and playing again a few days later in the 3–0 win against Cameroon, when he replaced John Obi Mikel in the 63rd minute.

He made the Eagles squad to both the 2018 FIFA World Cup in Russia and the 2019 Africa Cup of Nations in Egypt.

Also he was part of the Nigerian youth setup during his time at Nathaniel Boys of Lagos. While playing the African U-17 Cup of Nations with Nigeria, he was excluded along with two other players from the competition as a precaution, following an MRI age test that suggested he was just slightly above the required age.
2018 FIFA World Cup Genk Leicester City Nigeria Football Federation Premier League Wilfred Ndidi