El Clasico: Barcelona v Real Madrid, who is your winner? 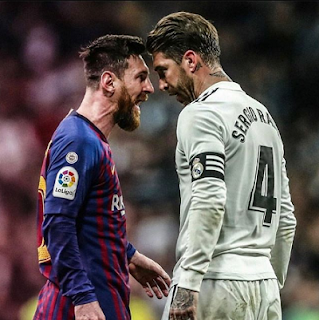 The 2019/20 La Liga season will feature the world’s biggest club game on Wednesday 18 December 2019 when Barcelona host Real Madrid at the Camp Nou.

This match was originally scheduled to be played in late October, but La Liga took the decision to postpone the fixture due to safety fears surrounding violent protests which were ongoing in Catalonia at the time.

As ever, the meeting of Barca and Real is one which could have a major effect on the title race, with both clubs pushing hard to be placed at the summit of La Liga’s log table.

Los Blancos manager Zinedine Zidane has stated that his side must focus on dethroning champions Barcelona as they look to build back to their glory days, while the Blaugrana will be looking to take three points off their rivals and take a massive step toward a third straight title and a fifth in the last six La Liga seasons.

“We have 33 titles,” Zidane said. “Barca [26 titles] are doing well, I will admit when a rival is doing well, but in history, Real Madrid has more league titles. But they have been doing better lately and we need to change the dynamic.”

SuperSport viewers will also be keeping a keen eye on Lionel Messi, who is fresh from winning a sixth Ballon d’Or [world’s best player prize] and holds the all-time record for the most El Clasico goals, with 26 to his name.

“You are aware of the privilege you have [of coaching Messi], but sometimes the day to day doesn’t allow you to enjoy it,” said Barcelona coach Ernesto Valverde. “Over time you enjoy it more. I’m aware of it, I’m lucky enough to say that I’ve coached Leo.”

In addition, Real captain Sergio Ramos has the chance to make a record 43rd Clasico appearance, pushing ahead of Manuel Sanchis, Francisco Gento (both Real Madrid) and Xavi Hernandez (Barcelona) in the record books.

Barcelona has enjoyed recent dominance over Real in La Liga matches, stringing together a run of six unbeaten matches and completing a league ‘double’ over the capital club last season, with 5-1 home and 1-0 away wins.

Overall, the teams have met in 242 competitive matches, with Barca claiming 96 wins compared to 95 for Madrid. This evens out to 72 wins apiece in their 178 La Liga meetings.