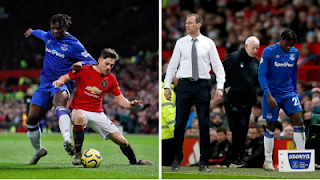 Everton manager Duncan Ferguson has spoken in more detail about the controversial substitution of Moise Kean during the club's 1-1 draw against Manchester United on Sunday afternoon.

Kean was brought on to replace Bernard in the 70th minute of play at Old Trafford.

But just 18 minutes later the Italian striker was hauled off by Ferguson, who didn't even acknowledge the 19-year-old before he walked off down the tunnel.

Ferguson, who is currently the interim boss at Goodison Park, originally suggested in his post-match interview that Kean was substituted to "kill a bit of time."

In an interview with Sky Sports after the full-time whistle, Ferguson said: "It wasn't because of Moise Kean's performance, it was just because I needed to make a substitution to kill a bit of time.

"I've got so many strikers on the bench, I just decided to make that change. It was nothing against Moise Kean really."

But later on in the day, Ferguson explained the situation in more detail during his post match press conference and appeared to change his mind on the bizarre substitution.

The former Everton striker suggested that Kean was simply not good enough when he was brought on in the 70th minute.

"He struggled to get up to the speed of the game," Ferguson said. "I asked him to go center-forward, then asked him to change to the right-hand side, which is unfair on him. That's when I said I'm going to put on a guy who can handle it a bit better.

"I think it's understandable if you're a sub and getting subbed off. I can see why he's upset. But it's for the good of the team. I'll speak to him next time I see him, I'll mention it.

"I've been there as a player myself, I've been subbed on and subbed off myself. He'll be fine. He'll come again, he's only 19.

The #SuperSunday panel react to a pretty big call from Duncan Ferguson - was he out of order? 💭 pic.twitter.com/HX7eIX192I
— Sky Sports Premier League (@SkySportsPL) December 15, 2019

Duncan Ferguson has had his say on *that* Moise Kean substitution... pic.twitter.com/uRNSxjYR8g
— Match of the Day (@BBCMOTD) December 15, 2019