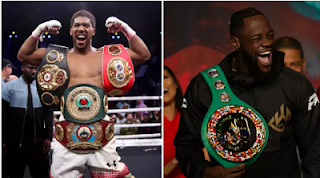 Deontay Wilder doesn't think he and Anthony Joshua will ever do battle in the squared circle.

Joshua regained his IBF, WBA, WBO and IBO titles in Saudi Arabia with victory over Andy Ruiz Jr on Saturday and once again there's plenty of fan interest in AJ taking on Wilder, who holds the WBC world heavyweight title.

Joshua-Wilder has the potential to be one of the biggest fights in the history of boxing but the undefeated fighter doesn't think the unification bout will happen and claims Joshua wants to avoid him at all costs.

"I don't think we'll ever see a unification bout," he told The Athletic after seeing Joshua avenge his first professional defeat ot Ruiz.

"We'll never see it, and I don't want people to get their hopes up on it because it'll never happen.

"I'm too dangerous. You've seen what I do in the ring. I don't play around. And they know if Ruiz can get Joshua out of there, imagine. That's why they stayed away from me."

Joshua's win over Ruiz was far from vintage as instead of trading with 'The Destroyer' like in the first fight at Madison Square Garden, he adopted a smart, old-school approach of sitting behind his jab and keeping the distance en route to a comfortable points win.

Knockout artist Wilder blasted the 30-year old for having Wladimir Klitschko in his camp and using the Ukrainian legend's 'boring' boxing style.

He added: "Joshua did what he had to do to get the win. He ran around the ring and was on his bike all day.

"Basically, he had Klitschko in the camp and he was a lot like Klitschko: that jab-grab-hold method. That's all he did tonight.

"You want to dominate guys, man. Maybe I'm just too rough, too hardcore and too much of a dream for this time and era, maybe the world wants that nice s**t... my mentality is so different from these other fighters.

"But when I think of myself as a champion... you want to come out there and whoop his a*s.

"I'm not coming in, after losing to this guy, to just dance and grab and jab and hold.

"I'm going to show the world and convince them I am the very best and that no-one is close to me, especially with what's going on in the division right now. It's a time of proving who is the best."

Following his latest win, Joshua has been ordered to face WBO mandatory challenger Oleksandr Usyk in his next fight and very much welcomes a bout with the Ukrainian.