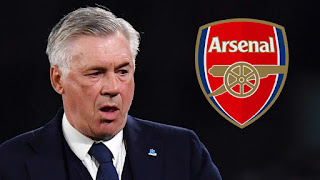 The former Chelsea and Real Madrid coach is now available after he was dismissed by the Serie A club on Tuesday night. Arsenal will hold talks with Carlo Ancelotti after the Italian was sacked by Napoli on Tuesday night.

The north London club are still searching for a permanent replacement for Unai Emery, who was dismissed a fortnight ago having overseen a run of seven games without a win.

Several names have been linked as potential candidates and Ancelotti has emerged as a possibility following his exit from the Serie A club.

A statement from the Italian side read: "SSC Napoli has decided to revoke the role of first-team coach from Mr Carlo Ancelotti.

"The rapport of friendship, admiration and reciprocal respect between the club, its president [Aurelio De Laurentiis] and Carlo Ancelotti remain intact."

Everton are interested in Ancelotti, 60, and will also look to speak to him about succeeding Marco Silva, who was sacked last week.

Goal has been told that Arsenal’s priority is a younger coach, but that a figure like Ancelotti can’t be ruled out given his wealth of experience at the top level where he has managed clubs such as Juventus, AC Milan, Real Madrid and Bayern Munich.

The three-time Champions League winner is believed to be keen on returning to England, where he spent two years in charge of Chelsea a decade ago - winning the double in 2009-10.

Official discussions with Arsenal are expected over the coming days as the Gunners continue to sound out potential candidates before drawing up a final shortlist.

One man who has been heavily linked with the role is former Valencia coach Marcelino, with some reports suggesting he was interviewed in London this week.

Goal has been told, however, that the 54-year-old is not being viewed as a leading contender to replace Emery. Neither is Paulo Sousa, despite claims that he has been targeted by the Gunners.

"They like his profile, not just as a coach but also as a person," an unnamed member of Sousa’s entourage told L'Equipe. "This does not mean that he will leave.

"They are in talks with multiple candidates but Paulo is part of that list, certainly. Between the two, it could work.

"But with all the problems currently ongoing at Bordeaux, why wouldn't he leave? The project is not what was promised to him, that is a fact. He loves the fans but he needs more from the board, the team is not strong enough to finish in the top six."
Article continues below

Mikel Arteta remains the leading candidate to replace Emery, but Manchester City would be reluctant to let Pep Guardiola’s assistant coach leave before the end of the season. Patrick Vieira is also being viewed favourably by the Arsenal hierarchy.

But head of football Raul Sanllehi and technical director Edu will not be rushed into making a decision and they continue to fully support Freddie Ljungberg, who got his first win as interim boss on Monday night against West Ham.

Importantly, the squad are happy with what the 42-year-old has done since being installed and the hierarchy back him to do the job for as long as is needed.
AC MIlan Bayern Munich carlo Ancelotti Champions League knockout stages Chelsea Edu juventus Mikel Arteta Napoli Pep Guardiola Real Madrid Serie A Unai Emery