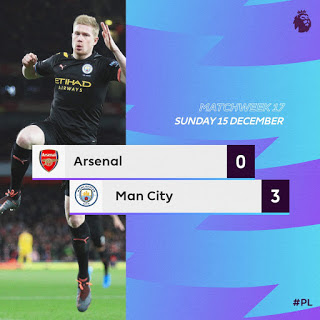 Kevin De Bruyne was the hero at the Emirates as his two goals helped Manchester City beat Arsenal 3-0 on Sunday night. It was the sixth time in a row Man City will beat Arsenal.

Arsenal's sloppy defense was exposed from the onset and Manchester City opened the scoring just after two minutes when Fernandinho moved forward from the back and slid a good, straight pass to Jesus on the left side of the area.

He lost Chambers neatly and cut the ball back speculatively from the byline.

It cleared everyone at the near post and reached Kevin De Bruyne at the far post, 15 yards from goal. He watched the ball bounce, adjusted his body and sidefooted a blistering shot into the roof of the net.

Arsenal was expected to respond real quick considering the massive home fans at the Emirates Stadium, but that was not to be as the Gunners went two goals down in the 15th minute.

Rodri and Foden were involved at the start, passing their way out of trouble in their own half.

Then De Bruyne played a give-and-go with Jesus and ran at Chambers on the left side of the box.

He drove a low cross that took a slight deflection, which wrongfooted Kolasinac and allowed the ball to reach Sterling at the far post. He swept it into an open net from six yards.

With five minutes to the end of the first half, De Bruyne scored his second and Manchester City's third goal.

The move started when Foden, who had just switched from left to right, played a little pass forward to De Bruyne.

He rolled Guendouzi, moved to within 20 yards of goal and curled an emphatic low drive into the bottom corner with his left foot. 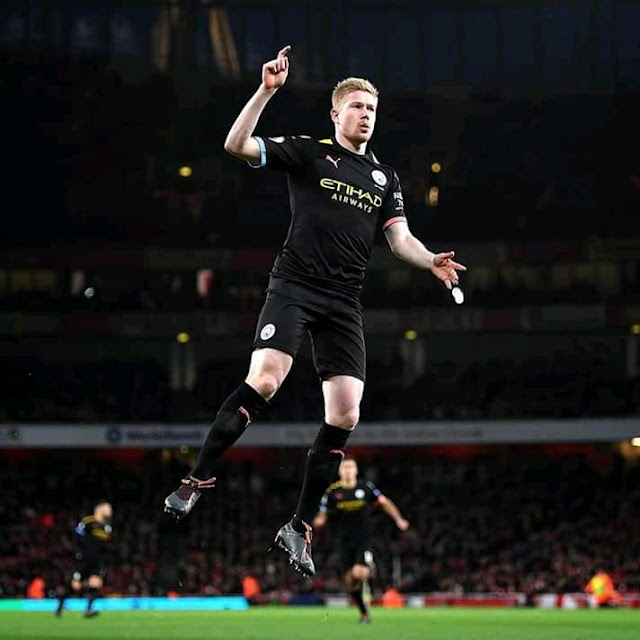 De Bruyne would have completed his hat-trick before the break but was denied by Leno.

Foden came infield from the right, beat a couple of players and then left the ball to De Bruyne, who slammed the first-time curler towards goal from 25 yards.

It looked certain to go in the corner of the net, but Leno flew to his left to fingertip it onto the post.

The whistle was sounded afterward to bring the first half to an end with Arsenal left to plan a strategic way of bouncing back at the restart.

Arsenal got the second half underway and they pressed forward for five minutes before City resumed their dominance.

De Bruyne picked up the ball in the center circle, surged to the edge of the area without being challenged and hit a low left-footed drive that was blocked by Chambers.

Two minutes after the hour-mark, a bad mistake from Chambers allowed Gabriel Jesus to run through on goal. His shot was superbly blocked by Leno, flying from his line, and Chambers put a bit of credit back in the bank by blocking Sterling’s follow-up.

It's been the second half of City dominance. They have kept the ball with greater ease, and Arsenal have struggled to get a kick in as the game entered it's final 10 minutes.

As the game winds down, Sterling played in Riyad Mahrez who came in for Ilkay Gundogan in the 70th minute, but his close-range shot was blocked by Leno. He’s had a decent day in the Arsenal goal.