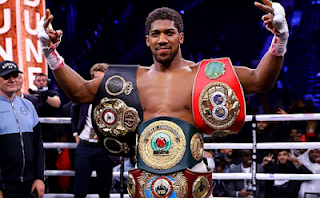 Boxer Anthony Joshua has 100 million smackers in the bank after recapturing his world heavyweight titles in Saudi Arabia.

The 30-year-old increased his fortune by £52million after winning his rematch with Andy Ruiz Jr – and could yet double it with a £200million mega-fight against Deontay Wilder .

Before Saturday’s win, Watford-born Joshua had made £49million from 23 professional fights after winning Olympic gold at London 2012.

Team Joshua member Mark Seltzer, a boxing manager and cut man with 50 world title bouts to his name, said: “The sky’s the limit for Josh.

"A mega-fight with Wilder could see them attract a purse of £200million.

"It’s the fight the world wants to see. With money from the Middle East and the Far East now in the sport, countless backers will pay."

Joshua was slammed for taking the rematch in Saudi Arabia because of its appalling human rights record but he could not turn down the payday.

Following his win, Joshua was joined in the ring by his family and hugged his three-year-old son, Joseph Bayley Temiloluwa Prince Joshua.

The boxer’s parents, Yeta and Robert, along with his sister, Janet, jumped up and down as they hugged the champion.