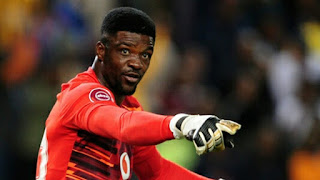 Kaizer Chiefs coach Ernst Middendorp has stated that Nigeria goalkeeper Daniel Akpeyi will keep the gloves for the forseeable future despite the availability of Bafana Bafana’s Itumeleng Khune.

Amakhosi are at home to Phunya Sele Sele in the Premier Soccer League (PSL) this weekend and Khune is set to spend time on the stands, with the manager adding that Bruce Bvuma will deputize for the Nigerian.

On the other hand, the German mentor jokingly stated he had been annoyed there were no questions from the media on the club’s fan favourite.

“I am so happy that…I was really irritated and confused that no one is asking about Khune,” Middendorp told the media as quoted by Phakaaathi.

“As I said, he is not injured, he is in training now. We have to make a decision about who now from a point of competitiveness is best prepared for this game we have on Saturday evening.

“It is Daniel Akpeyi and it is he who will play. The second best prepared at the moment is Bruce Bvuma and he will be the second goalkeeper.”