on September 01, 2019
Bukayo Saka has been given a glimmer of hope that he is in contention to be included in Arsenal's matchday squad for Sunday's eagerly anticipated Premier League match against North London rivals Tottenham Hotspur.

Manager Unai Emery called up the teenage Nigerian winger to train with the first team at London Colney in St Albans on Saturday. 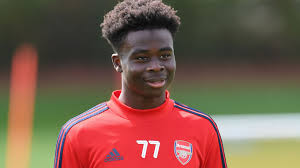 Wingers Pierre-Emerick Aubameyang, Nicolas Pépé, Reiss Nelson and Henrikh Mkhitaryan took part in the session and this suggests that Saka has a slim chance of making his first appearance of the season against Spurs.

To date the Hale End Academy product has played four matches for Arsenal's first team, the last coming against Blackpool in the FA Cup about eight months ago.

Despite Saka's limited first team experience, he showed signs of promise in the five matches he was involved in during the pre-season.