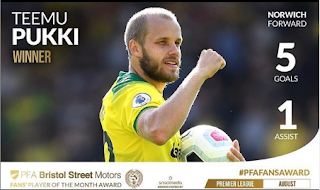 Norwich's Teemu Pukki has been rewarded for his fantastic start to the season by winning the PFA Premier League Player of the Month award for August.

The Finland international scored a brilliant hat-trick against Newcastle, while also netting against Premier League giants Liverpool and Chelsea.