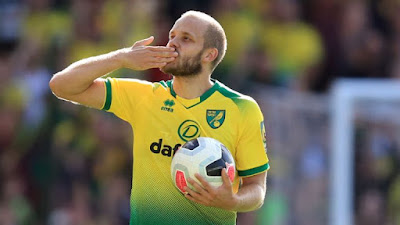 Norwich striker Teemu Pukki has been named the Premier League Player of the Month for August.

Pukki scored five goals in four games in August in what is his maiden Premier League season, including a hat-trick in their 3-1 victory against Newcastle.


The Finland international, signed on a free transfer from Danish side Brondby IF in 2018, scored 29 league goals to help Norwich seal promotion to the top flight as Sky Bet Championship winners last term. Aguero tops the scoring chart with six to his name, ahead of team-mate Sterling (five) and Barnes (four).
August Finland international Norwich Premier League Player Of The Month Teemu Pukki