Super Eagles Fly To Kyiv September 6 Ahead Friendly Vs Ukraine.

on September 01, 2019
Super Eagles’ contingent made up of goalkeeper Ikechukwu Ezenwa, officials and coaches are expected to depart Nigeria for Kyiv, Ukraine, on Friday, September 6 for the international friendly match against ‘The Yellow and Blues’.
The majority of the players invited for the international friendlies are overseas-based and are expected to fly to Ukraine from their respective abodes.
Super Eagles manager, Gernot Rohr, listed 23 players for the match. Only Heartland new signing from Katsina United, Ikechukwu Ezenwa, is the only Nigeria-based player in the squad. 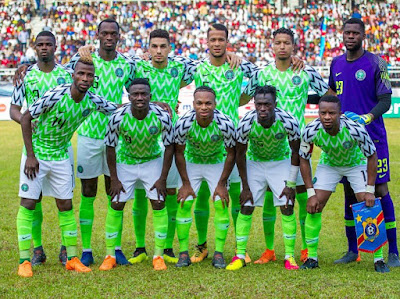 Highlight of the 23-man squad is Kelechi Iheanacho who is making a return to the senior national team set up after missing the cut for the 2019 Africa Cup of Nations in Egypt.
The match billed for September 10 at the Dnipro Arena, Kyiv, is the first time both nations would be crossing each other’s path at this level.
Checks reveal that the protocol department of Nigeria Football Federation, NFF, is already speeding up the process of acquiring Ukrainian travel documents for the contingent, including the overseas-based players.
“All the players and officials who will make the trip already have their passports submitted to the Ukraine embassies,” an official of the NFF..
“Hopefully, in the next few days, the visas would be out because we aren’t anticipating any hitches.”
Also, the match against Ukraine could afford Fortuna Dusseldorf of Germany goalkeeper, Maduka Okoye opportunity to make his Super Eagles debut after called up by Rohr.
It is also an opportunity for Glasgow Rangers of Scotland midfielder, Joe Aribo, to make his Super Eagles debut and lay a claim to the senior national team shirt.
Aside filling the FIFA International window, the game against Ukraine will help Super Eagles shape up for the Cameroon 2021 AFCON qualifiers as well as the Qatar 2022 FIFA World Cup qualifiers.
Gernot Rohr Kyiv NFF Super Eagles Super Eagles manager