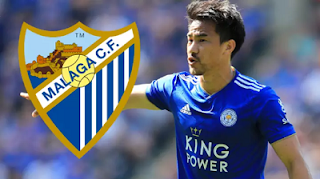 Former Leicester City striker Shinji Okazaki has had his contract with Malaga terminated just 34 days after signing, because the club couldn't afford to keep him.

Okazaki's contract with Leicester expired at the end of last season, after four years with the Foxes, and he signed a one year deal with Segunda Division side Malaga on July 30th.

Just over a month later the Japanese forward has had his contract terminated because his wages couldn't be met with their wage budget and they were unable to make space for the striker.

In a statement on his Twitter account Okazaki said, "Hello Malaguistas, first of all I want to thank you for the immense love you gave me during my stay.

"I want to say goodbye and wish the greatest success to my team-mates and the staff that made me feel at home. I do not regret anything, I will never forget the time I have spent with you.

"If one day I have the opportunity to play for Malaga CF, I will have no doubts."

Okazaki is now free to look for a new club, despite the fact that the European transfer window is closed, and he will be hoping to sign for someone soon.

The 33-year-old missed out on the Japan squad for their upcoming games against Paraguay and Myanmar, the latter a World Cup qualifier, because he hasn't been playing much recently.

The former Foxes forward only scored 14 Premier League goals in 114 games for the club, after signing for £7 million from Mainz, but he was often needed to do more of the running and chasing for his fellow forwards for the team.

He was a vital part of the squad that surprised everyone to win the title in 2016, scoring winning goals in the games against Everton and Newcastle United. 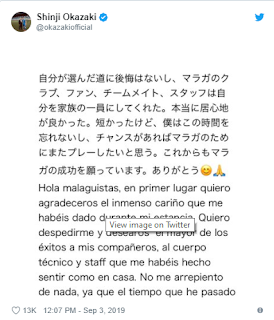