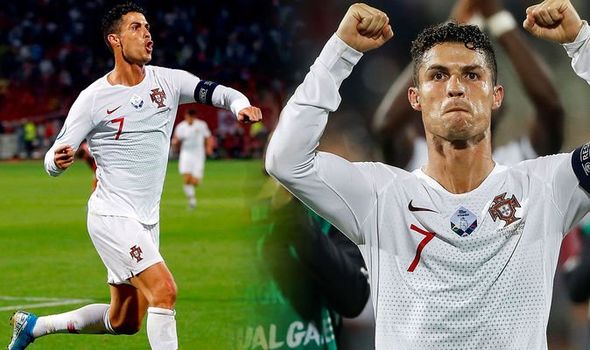 Cristiano Ronaldo scored four to take his international tally to 93 goals as Portugal claimed a 5-1 win over Lithuania in Euro 2020 qualifying on a night to forget for goalkeeper Ernestas Setkus.

With Ronaldo's early penalty having been cancelled out by Vytautas Andriuskevicius before half-time, Setkus was guilty of a blooper when he fumbled a strike from the Juventus forward to again hand this year's Nations League winners the advantage.

Second-placed Portugal moved within five points of leaders Ukraine, who they have a game in hand on, with the victory.

The visitors got off to the perfect start when they were handed a seventh-minute penalty after Markus Palionis was penalised for blocking Joao Felix's cross with his hand.

Ronaldo made no mistake as he kept his cool from the penalty spot, firing low into the bottom-right corner to add to the goal he scored in Saturday's win over Serbia.

Portugal continued to look a threat and Jose Fonte and Ronaldo both saw efforts saved by Setkus.

And the reigning European champions were left rueing those missed chances in the 28th minute when Andriuskevicius rose highest to head Mantas Kuklys' outswinging corner in off the post.

Then, somewhat inevitably, it fell to Ronaldo to turn the match back in Portugal's favour once more - but he had more than a helping hand from Lithuania goalkeeper Setkus.

What appeared a routine strike from Ronaldo from the edge of the area with 61 minutes on the clock was fumbled by the goalkeeper before spinning up and bouncing in off his back.

Ronaldo then made certain of the points four minutes later when he swept home Bernardo Silva's right-wing delivery before the pair combined again in the 76th minute, with the ex-Real Madrid player finding the bottom-right corner from inside the box.

Carvalho added further gloss in added time with a smart finish after the ball fell kindly to him inside the penalty area.
Carvalho Cristiano Ronaldo European qualifiers Lithuania