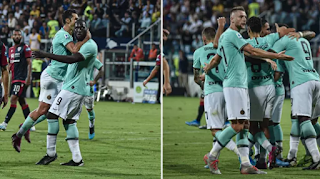 Romelu Lukaku was subjected to horrid racist abuse from Cagliari fans after his penalty for Inter gave Antonio Conte's side all three points.

The Inter summer signing had the chance to put his side 2-1 up from the penalty spot after Fabio Pisacane fouled Stefano Sensi and the Belgian was met with monkey chants as he stepped up, which only intensified after scoring.

Unfortunately it is not the first time that Cagliari fans have directed racist abuse at an opposition player and earlier this year Moise Kean was subjected to similar.

Playing for Juventus the striker scored to put his team 2-0 up in April and reacted by celebrating in front of the fans that had been directing their vile abuse at him all game.

Lukaku similarly gave the Cagliari faithful a stare before teammate Milan Skriniar told the fans to 'shush' during celebrations for the goal that gave Inter all three points.

The fans of the home team rightly came in for a lot of criticism last season for the Kean incident and Serie A referred to their actions as 'reprehensible' but chose not to sanction the club or its fans in any way.

Serie A took no action for the previous situations either and in 2017 Sulley Muntari was punished by the league for walking off the pitch after he suffered abuse at the hands of the fans.