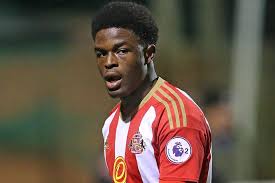 This is the first time Maja who is eligible to play for both Nigeria and England will be invited to the Super Eagles.
“Nigeria coach Gernot Rohr has called up Josh Maja in the squad to face Ukraine on 10 September in a friendly. The young striker (20) will join his team-mate attack in Bordeaux, Samuel Kalu. This is his first call in the national team. Born in London of Nigerian parents, Josh is eligible for both selections [Nigeria or England],” reads the statement on Bordeaux website.
Maja linked up with Bordeaux from Sunderland in January. He also previously had stints with Crystal Palace and Fulham.
The young striker has scored one goal in four league appearances for Bordeaux this season.
Bordeaux Dnipro Arena friendly international Josh Maja Nigeria National Teams Samuel Kalu Super Eagles Ukraine