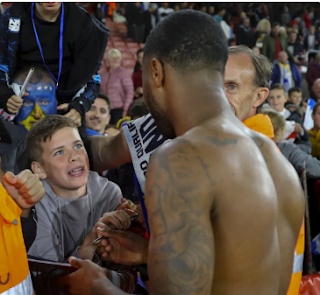 Raheem Sterling showed his class on Tuesday night with a brilliant gesture to a young England supporter.

The Manchester City star went over to the fans after England's 5-3 victory against Kosovo.

The 24-year-old was signing autographs before a fan asked for his boots. He untied his boots and handed them to the kid who couldn't contain his excitement.

Sterling produced a 'Man of the Match' performance for England as he scored one goal and created three in a spectacular showing at St Mary's.

He leveled the game in the eighth minute before setting up Harry Kane and Jadon Sancho twice.

"Our attacking play from Raheem, Jadon and Harry was outstanding. Raheem's two performances have been of the highest level," he said.

"I think he's been almost unstoppable, his awareness of where defenders were, his ability to ride challenges, his vision and desire to get in on goal, and unselfish play as well, so I couldn't speak highly enough of the way he played."

"It is impossible to play against him," he said. "I know Sterling in the past was very speedy but the last choice or shot was not good. Now he is incredible. He has learned a lot from Guardiola and is one of the best players in the world now."

Sterling's on red-hot form. He scored in England's win over Bulgaria on Saturday and is firing on all cylinders for his club.