Nobody talks about you anymore' - Anthony Joshua & his promoter, Eddie Hearn come for Tyson Fury 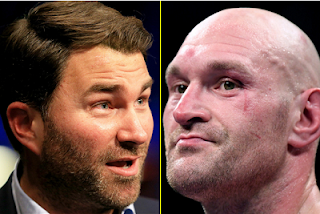 Matchroom Boxing owner and manager/promoter of recently dethroned Anthony Joshua, Eddie Hearn, has come out to blast former British heavyweight champion Tyson Fury, claiming no one is interested in his fights.

Fury, who gave up his four heavyweight belts due to his battle with mental health four years ago and is still undefeated as a heavyweight boxer, faces unknown but undefeated Swedish boxer, Otto Walin on September 14th, and Hearn, who Fury has verbally blasted so many times in the past, feels Fury is fighting people he knows can't beat him.

Fury defeated Tom Schwarz in two rounds in his most recent fight, after a draw with Wilder.

Hearn speaking to Sky Sports said: “Fury has easy fights that nobody is interested in.

“He supposed to be the best heavyweight in the world? Nobody is talking about his fight.

“The interest in Fury is diminishing. It is nearly a year since he fought Wilder and what has happened? Nothing.

“Fury is a competitor and is up for a fight, but he’s having fights where he cannot get beaten. His profile will dip and his hunger might as well.”

''I fought Wallin as an amateur. [Wilder and Fury] are the cream of the crop and shouldn't be fighting those type of people. I can't fight Wallin, I don't think I can ever fight lower-tier heavyweights."