on September 01, 2019
Istanbul Basaksehir star Azubuike Okechukwu is in line to captain the Dream Team VII in their U23 Africa Cup of Nations qualifiers against Sudan.
The central midfielder has received a call-up to the Nigeria U23 squad for the upcoming games and he is expected to join the team on Tuesday, September 3. 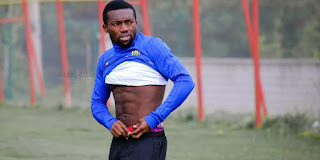 Nigeria U23 coach Imama Amapakabo has confirmed to this website that some foreign based players will be included in the traveling party to Sudan and added that the Nigeria Football Federation will announce a finalized roster in the coming days.

Okechukwu was part of the Nigeria U23 side that beat Libya 4-2 aggregate to advance to the final round of qualifiers.

The Pyramids FC loanee featured regularly for the Dream Team managed by Samson Siasia and had skippered the team before Mikel Obi was added to the Olympic Games roster.