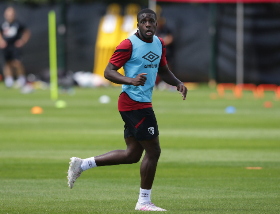 Nigeria U20 star Nnamdi Ofoborh has made his professional debut for Wycombe Wanderers aged 19 years and 10 months.

The Bournemouth loanee was called into first team action by manager Gareth Ainsworth  in the 59th minute as Wycombe Wanderers registered a 3-1 win against Lincoln City at Adams Park.

Ofoborh first made the Bournemouth match day squad against MK Dons in the League Cup in August 2018 and was also in the 18 for first team matches against Fulham, Spurs, Blackburn, Norwich and Forest Green Rovers but was a non-playing substitute each time.

Against Lincoln City this afternoon, the Flying Eagle replaced Matthew Bloomfield, who had to be stretchered off after suffering an injury.

A Joe Jacobson brace and an additional tally from Michael Bostwick saw Wycombe record their fourth win of the season while Lincoln City's Nigerian striker John Akinde reduced the deficit on 50 minutes.