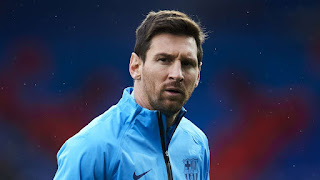 The Argentine, along with Luis Suarez, continues to work away from the first team and will not be ready to feature on Saturday


Barcelona star Lionel Messi is all but out of Saturday's La Liga meeting with Valencia as he continues personalized rehabilitation work away from the main group.

The Argentine has not made a competitive appearance for his club so far this term after picking up a calf injury shortly before the Blaugrana's pre-season double-header with Napoli in the United States.

Head coach Ernesto Valverde did state that his star man would be available for selection following the international break and admitted to having his own hopes that Messi would be ready to face Los Che after Barca's mixed start to the season.

A 1-0 loss at Athletic Club in their opening game in La Liga preceded a 5-2 win over Real Betis and a 2-2 draw with newly-promoted Osasuna before domestic play was paused.

However, Messi has continued to work alone on his recovery, missing Tuesday and Wednesday's sessions with the main group and his participation against Valencia, who beat Barca in last season's Copa del Rey final, appears to be off the cards.

The attacker's injury has been closely monitored by the club's medical team but no return date had ever been specified, with Messi's levels of discomfort being looked at on a day-to-day basis.

And, while the Camp Nou captain has not stopped working on his recovery and was aiming to return against Valencia, the player lacks full match fitness and the rhythm of featuring in competitive clashes and is therefore unlikely to be risked.

He is also likely to miss out on the Champions League opener against Dortmund on September 17.


Luis Suarez, meanwhile, has been out of action having suffered an Achilles tendon injury in Barca's defeat against Athletic at San Mames.

Reports in Spain had suggested this week that Suarez would make the cut against Valencia, and, having featured in the group session on Wednesday, he could well be in the squad for the match at Camp Nou.

That said, Valverde may also choose to hold back the Uruguayan to ensure he is able to play in the Champions League clash against Bundesliga title hopefuls Dortmund.
Barcelona Champions League Lionel Messi Luis Suarez