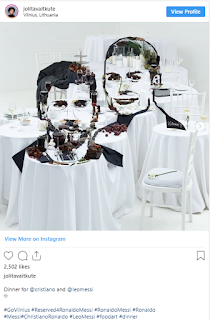 During the UEFA Champions League draw in Monaco on 29 August, Cristiano Ronaldo admitted that he and his arch-rival Lionel Messi "have a good relationship" but the pair of Ballon d'Or winners "have not had dinner together yet."

Sitting next to Messi while being interviewed for BT Sport, Ronaldo finished his speech by expressing his hope of sitting down with the man he has shared the stage with for 15 years.

With the two titans of world football incredibly busy breaking records and scoring a hatful of goals, we might have to wait a fair while before Messi and Ronaldo do share dinner together.

But in response to the invitation, Lithuanian artist Jolita Vaitkutė spent a staggering 27 hours putting together a piece of how Ronaldo and Messi having dinner together might look.

In total, the artwork is eight meters long and three meters wide, made of 658 objects that include oysters, shrimps, grapes and various desserts and drinks. Every object was picked individually from 17 different stores around Vilnius, the Lithuanian capital.

Explaining what prompted her to create the mindblowing design, Jolita told SPORTbible: "In response to Ronaldo's comments, the city of Vilnius decided to act as a mediator between the two living football legends and offer them dinner at one of the city's top restaurants.

"Ten of the top-rated restaurants jumped on board by inviting the distinguished guests to try the best their chefs have to offer.

"To make sure the two footballers would have a wide enough range of eating places to choose from, a table for "Ronaldo and Messi" was reserved in each of the restaurants. This is why we chose to make portraits from meals, glasses and tables as a invitation visual."

The artwork has been receiving great exposure on social media and Jolita hopes that Messi and Ronaldo will see the invitation and accept the offer to come for dinner in Vilnius.

Asked who she thinks the GOAT really is out of the two, Jolita added: "Both of them are cool. I just like the friendship between two opponents."
3D Art 3D Art Made Of Food And Restaurant Equipment Cristiano Ronaldo Food Lionel Messi Messi And Ronaldo Restaurant Equipment Viral