on September 03, 2019
Manchester United striker of Nigerian descent Dillon Hoogewerf has been named in the Netherlands U17 provisional squad list for upcoming international matches this month. 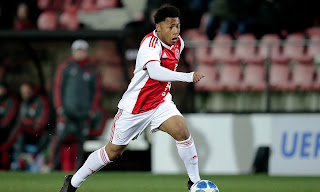 KNVB coach Mischa Visser has included the former Ajax Amsterdam wonderkid in a 33-man preliminary list for two matches against the French national team on September 17 and September 19.

Hoogewerf will find out if he is contention to make his debut for the Dutch U17 side when the finalized roster is announced on Monday, September 9.

The 2003-born player featured regularly at earlier age groups including for the Netherlands U15 and U16 teams.

If he features against France, that appearance does not provisionally cap-tie him to his country of birth as both games are friendlies.