on September 04, 2019
Manchester City defender Aymeric Laporte has undergone successful knee surgery after being stretchered off in their 4-0 win over Brighton on Saturday. 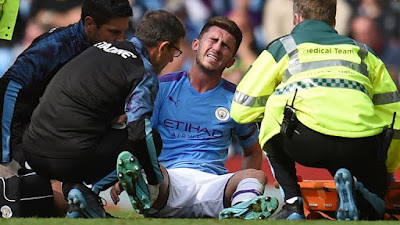 The Frenchman, 25, went down under a challenge from Brighton centre-back Adam Webster in the 34th minute of the match at the Etihad Stadium.
A club statement released by City says: "Aymeric Laporte has undergone surgery on his knee after damaging his cartilage and lateral meniscus.
"The surgery, carried out by doctor Ramon Cugat in Barcelona, was successful and a more detailed prognosis will be provided in due course."
After Vincent Kompany left for Anderlecht in the summer, John Stones has missed the last two matches with a thigh injury, leaving just Nicolas Otamendi as their only fully-fit centre-back.
Uncapped Laporte was recently selected for Didier Deschamps' France squad for the upcoming European Qualifiers against Albania and Andorra.
Aymeric Laporte Didier Deschamps France Manchester City