Lukaku has never been so happy and focused - Martinez

on September 09, 2019
The striker has made quite an impression with the national team after his recent club transfer. 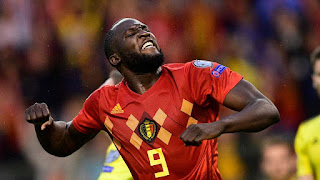 Belgium head coach Roberto Martinez has admitted this is the first time he has seen Romelu Lukaku so focused and happy as he backed the Inter star to lead the way for club and country.
Lukaku became Inter's most expensive signing when he joined from Manchester United in August.
The 26-year-old, who spent two seasons at United following his Everton exit before moving to Milan, has scored two goals in his first two matches for Antonio Conte's side in Serie A.
Speaking ahead of Monday's Euro 2020 qualifier against Scotland in Glasgow in Group I action, Martinez revealed Lukaku has never looked so good.
"This is the first time I have seen him free and happy. Going back to many camps I have not seen Rom so focused, so happy, so refreshed by the new challenge," Martinez told reporters.
"I think he is now ready to face one of the biggest footballing chapters in his career with the Inter Milan move. And he is very driven to be as good as he can for the national team, so I have been very impressed with his happiness and the way he is looking forward to the football ahead."
Lukaku was an unused substitute in Belgium's recent 4-0 win over San Marino with Michy Batshuayi given a rare chance to lead the line and scoring twice.
The Red Devils currently sit top of Group I for Euro 2020 qualifying having won all five of their games to date - scoring 15 goals and conceding just one in the process.
Martinez is however wary of the threat Scotland could pose on Monday, despite the fact Belgium claimed a 3-0 win when they met in June.
"I expect a really tough game," he said.
"I thought the first 15 minutes against Russia is the best I've seen Scotland for many years. From their intensity, the intent, the quality in the wide areas to be able to get a really good formation and get players in good positions.
"Then there is the emotional side. Sometimes you have something to lose and you start performing in a different manner. We have to be very, very careful.
"I think we're going to see a free Scotland team that can go and enjoy the 90 minutes. We have to be ready to perform under those circumstances."
Belgium head coach Euro 2020 qualifier Lukaku Manchester United Roberto Martinez