Jürgen Klopp on Manager of the Month award. 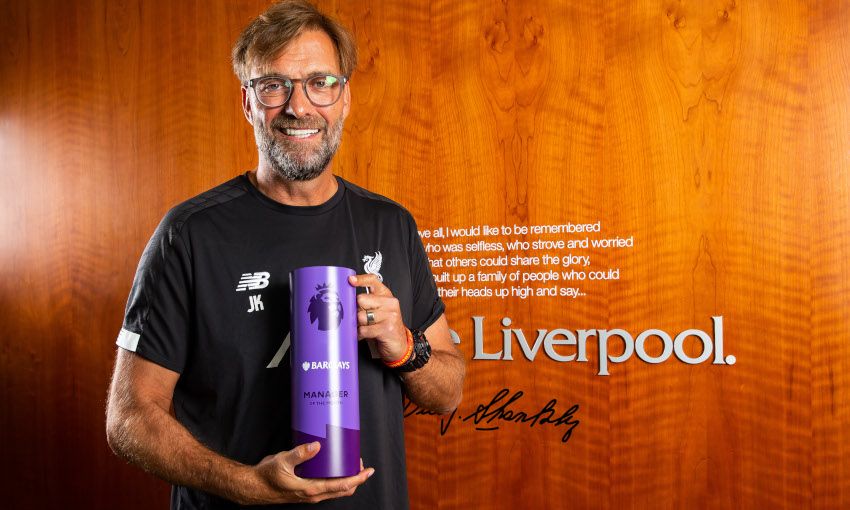 The Liverpool boss received the award for the fourth time after guiding his team to a 100 percent record since the start of the season.

The prize served as ‘proof’ of the Reds’ impressive form in beating Norwich City, Southampton, Arsenal and Burnley, according to Klopp.

“I said before to the boys, the coaches, we won the Manager of the Month award again. It’s really nice,” the German told Premier League Productions.

“It shows the last month was obviously good; the boys won four games in the league, won the Super Cup. We lost the Community Shield but that game was good as well.

“The start was good so far and this is proof of that. Thank you very much.”

Perhaps the most eye-catching of Liverpool’s four Premier League wins in August was the 3-1 success over Arsenal at Anfield.

And Klopp agreed it was the Reds’ most complete performance of the month.

“Arsenal at home,” he replied when asked to pick the best of the four league games. “Burnley was quite impressive as well, it was the best Burnley game we played so far.

“But Arsenal at home was a statement – it was really wild in the best-organised way I ever saw. It was really good.”

Klopp’s team resume their Premier League campaign at home to Newcastle United on Saturday, which is the first of seven fixtures in three weeks in all competitions.

“It will again be a very difficult season, a very long season. September is coming and we have seven games in 21 days – that’s an interesting number,” he added.

“We have to make sure we can win as many games as possible because all of them feel like finals. You start now against Newcastle, then we go to Napoli and then we go to Chelsea.

“We have four away games in that period, interesting, and a lot of travelling. They are things which could be tiring but when you win football games, they are not – and that’s what we try.”
Arsenal Burnley Jürgen Klopp Liverpool Manager of the Month Norwich City Southampton