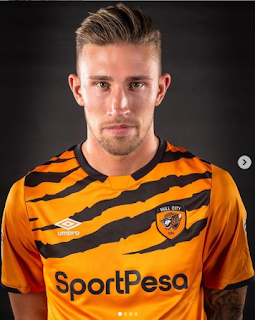 Hull City have confirmed defender Angus MacDonald has been diagnosed with bowel cancer.

MacDonald, 26, joined the club in January 2018 following an impressive spell with Barnsley, where he was club captain.


The defender made three appearances for Hull last season, his last coming in the Carabao Cup defeat to Derby in August.

MacDonald was diagnosed with a blood clot in his calf in September, which initially forced him out for nine months.

In a post on Instagram, MacDonald said: "This is not an easy post to write but life isn’t always an easy road to navigate. The news broke today from my club that I have been diagnosed with bowel cancer.

"After a year on the sidelines and recently getting back into full training, returning to the pitch felt closer than ever, so this news has come as a complete shock and is hard to take and fully process.

"However, I’m blessed to have fantastic family and friends and some very good people around me to help me get through this, as well as amazing team mates and staff at the club who have been with me all the way through the past year. I’m getting my head around this new challenge that lies ahead.

"I will be ready to fight this head on, and I’m going to do whatever I can to get back to full health and back on that pitch. "

His comment was replied to be girlfriend and X Factor winner Alexandra Burke, who wrote: "Always by his side. Forever."

A club statement read: "Hull are sad to announce that Angus MacDonald has been diagnosed with early stages of bowel cancer.

"Angus has shown great strength of character in the way he has reacted to this news.

"The whole Tigers family join together in showing Angus continued love and will support him in his recovery. His physical and mental wellbeing are our number one priority at this moment in time.

"The club kindly requests that supporters and the media respect the privacy of Angus and his family at this time. Please also note that any further updates on his progress will be provided by the club."
Angus MacDonald Angus MacDonald Diagnosed With Bowel Cancer bowel cancer Defender diagnosed Hull city Hull City Defender