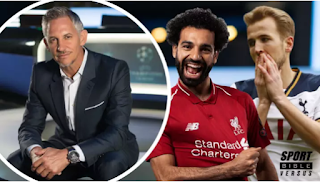 Gary Lineker slides his arms across the table as if he's preparing to create a makeshift pillow. He's just been asked another question about Wayne Rooney's move to Derby County.

The seasoned pundit musters the words to respond, but his voice carries the energy of a Mesut Ozil performance on a wet, windy night in Stoke.

Once the interview is over, Lineker takes a bite of a banana and SPORTbible slides into position to explain the premise of his next one-on-one. Versus: Two choices, one answer. Lineker raises his eyebrows and sits up in his chair,

"God, they're so different, even if their numbers are similar. If I had to buy one I'd probably have Mo Salah. For only one reason, that Harry's got a little ankle issue. If you guaranteed me no injuries I'd take Kane, but you're asking me the question if I had to buy one now I'd take Salah because he's strong and he's not had those injuries. Once you have two or three injuries in any part of your body, it can be debilitating and reoccur. I'm not talking about who's the better footballer, because they're very different players, both great players, but just because of that slight doubt about Harry's fitness I would pick Mo."

You're talking about two very talented managers... Poch is great, but Pep's a genius. Pochettino is a really great coach and hasn't had the opportunities perhaps that Pep has, but I don't think anyone would say he's above Pep at the moment. Pep has won the Champions League and loads of league titles in different countries. He's done it everywhere. The guy is a genius, there's no question about that.

Both. Of course, he's overpriced because the market is mad. First thing you think is, "Oh, £80 million, that's a lot for a centre-half" and it is, it's a mad amount of money. We've (Leicester) lost a really good player so what's important now is how that money is spent on replacements. It could be really beneficial, but for supporters, they're losing another good player just as they start to think we're doing well. Manchester United needed a ball-playing central defender and Solskjaer wanted Maguire. He's a terrific player so the board backed him. Some Manchester United fans will say, "Oh we've overpaid", but it doesn't make any difference to them. It's just a number, isn't it? The club will still make loads of money. Liverpool fans said it about Van Dijk, but nobody's saying it now. Van Dijk's gone on to be brilliant.

The old Lampard-Gerrard question, eh? I honestly have no idea. No-one knows. I've worked with both of them and they're intelligent, driven, workaholic guys who were top players. They've both got really good opportunities now. Frank's done pretty well in his first season and it looks like he's changing the way Chelsea are going to play. Steven Gerrard improved Rangers a little bit, but it's always tough in your first season. They've both done really well and I know them both too well to answer that question!

Messi. I love them both, but if you say on Twitter, "that's an unbelievably great goal from the wonderful Cristiano Ronaldo" you'll get Messi fans on your case and if you say something brilliant about Messi, which I do a lot because he's ridiculous, you'll get Ronaldo fans on your case. You can love them both and admire them both which I do, but they're very different. Ronaldo's an athlete. He's driven, he's got the absolute best out of his game. He's the best header of the ball I've ever seen and the best goalscorer I've ever seen. But Messi is also as good a goalscorer as there's ever been and he's as good a passer as you'll ever see and as good a dribbler as you'll ever see. When I watch Ronaldo I admire him, when I watch Messi he gives me joy and for me, that's the difference.

Next best: Hudson-Odoi or Sancho?

They're both terrific. What Sancho has done in Germany has been great for him and I think we're at a time when we've (England) got lots of terrific, exciting young players. I'd also put Phil Foden alongside these two. Euro 2020 might be a bit early for us but we'll be very competitive in Qatar. If I had to choose one? At the moment I'd go for Sancho because he's fit and Hudson-Odoi has had that injury.

Stuart Pearce. Vinnie Jones never got near me. You could hear him coming, "Plod, plod, plod". Stuart clattered me a few times, but I remember one incident distinctly. Stuart was not a fellow that smiled. He never smiled and even when he scored a goal he was quite aggressive in his reactions. One time I saw him smile as he took a free-kick at Forest and I was in the wall. He absolutely twatted it, as he did, and it went straight in my bollocks and laid me out. He turned to the crowd and laughed.

Tech: VAR or no VAR?

VAR, but used cautiously. It's been overused and just for minutiae of handballs and stuff. Stick with the referee's decision unless it's clear and obvious. What's clear and obvious? Obviously, some people's interpretation is different from another's, but I just think the officials have been using it too much. It wasn't too bad in the World Cup, but some of the things we saw last season, and this new handball interpretation, were ludicrous. Use it cautiously, use it wisely, use it obviously. We all know when there's a massive howler.

Oh, I'm biased. 1990, we were good. We had a nice mix of really good technical footballers, intelligence and the facility to adapt on the field to different systems. And we had world-class players. Quite a lot of them. Last year's team did brilliantly but probably did better than the overall level of the squad at this particular stage. Better things will come from them. We might see the best ever England side in the next few years. The Euro 96 team were great too, but they were playing on home soil and it was a European Championships, not a World Cup.

[Pauses] Oh, I kind of like Three Lions. World In Motion is a great song, probably a better musical song and John Barnes was involved obviously. I wasn't involved at all even though it's my team, my time, whereas I get a mention in Three Lions.

If I had to keep one... I'd keep Piers because he's an easy target.
Cristiano Ronaldo Gary Lineker Harry Kane Lionel Messi Mo Salah