Finding another Messi is impossible - Fabregas 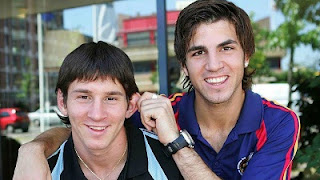 Cesc Fabregas believes it's impossible that another player like Lionel Messi will emerge in the future.

Having had the privilege of playing alongside the Argentine, Fabregas declared Messi is truly one of a kind when asked if there ever could be another like him.

"We've seen the likes of Ronaldo and Ronaldinho, amazing players, but Messi has been the best for 15 years. He's in his 17th season and he's been the best since he was 18 years old.

"I've seen things you wouldn't believe. Every three days he scores goals, he heads off to play for Argentina, he comes back jet-lagged and scores a hat-trick... that's not normal, believe me.

"I would have liked to enjoy playing more with Leo. I had a bit of bad luck in that respect. The first season we had together we had a great understanding. But the two following seasons was when I had my worst time with injuries. I wasn’t at my best at key moments and that affected everyone, including Leo."
Barcelona Camp Nou Cesc Fabregas Fabregas Finding another Messi Footballer greatest footballer Impossible Lionel Messi Monaco player Teammates