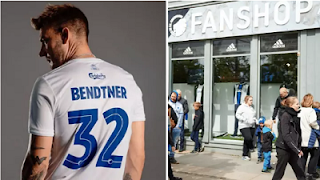 FC Copenhagen's club shop have officially sold out of adult replica jerseys and it's all because of new signing Nicklas Bendtner.

The former Arsenal striker joins his hometown club from Norwegian champions Rosenborg BK on a deal until the end of the year, and his arrival has certainly caused a buzz among supporters.

In the space of 17 hours, FC Copenhagen's website momentarily crashed and the club's 2019/20 home shirt is no longer available after 'Bendtner 32' was printed so many times.

After another busy day in the club shop, Copenhagen fanshop store manager, Martin Nohr, said they have "never" sold so many shirts in 24 hours.

"There has been huge interest in securing our new home jersey with 'Bendtner 32' on the back, which has meant that the jersey is sold out in all sizes." he told BT.DK.

"We are at an unprecedented level in recent years when it comes to selling jerseys, and there is a huge interest in our jerseys at the moment.

"We have never sold so many jerseys in one day!"

Bendtner will train with his new teammates for the first time on Wednesday at the training ground.

And he can't wait to get started at the Danish Superliga side.

"I know it is a very special opportunity and I will do everything in my power to seize it for the next four months," Bendtner said after he penned a deal.

"When I was 16 and left home, there was a lot I didn't know about. 15 years later, I can honestly say that it feels even bigger than I dreamed.